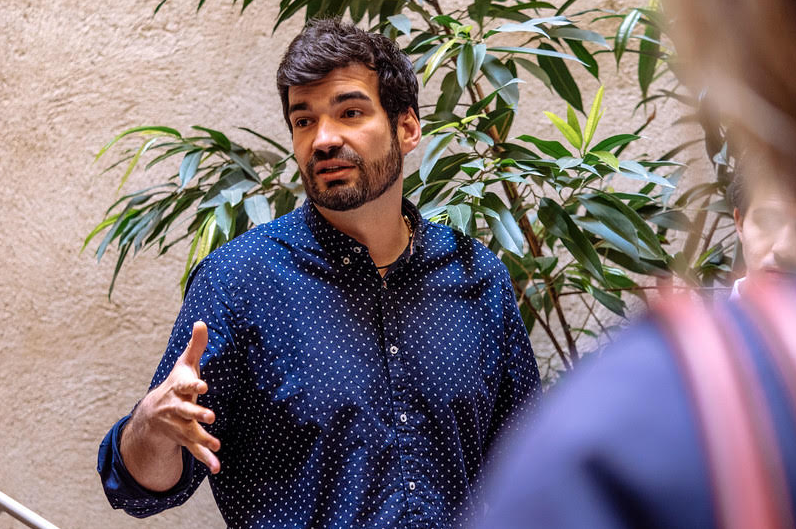 Dialogue, teamwork and cooperation for the success of Parallel Traces: a conversation with Victor from AEPJ!

AEPJ is the project leader of Parallel Traces: what are the challenges that you have faced and what are you learning from your involvement in this role? What has been the most rewarding aspect until now?

Perhaps the most important challenge is that this is our first project within the Creative Europe Program. From the design of the application to the first steps, everything has been a learning process. Since the first moment, we have believed a lot in the project and in the positive impact it could have, thus we have tried to replace the lack of experience with a lot of work and motivation. I feel very fortunate to be part of such a professional and committed team. In this regard, I am very grateful to all my colleagues of CUMEDIAE, with whom we have ventured together from the first moment in moving the project forward. From the very beginning, when it was just an idea, a dream, to the management of actions and activities. Without their help, we would not have been able to present this project with the guarantees that a European project needs. And this is the aspect that is most rewarding for me. The dialogue, teamwork and cooperation. The institutions that are part of the Parallel Traces Consortium have very different backgrounds and fields of work, and I think we complement each other in a very interesting way. An intercultural dialogue, which is a fundamental aspect of the project, has begun with the same institutions that have defined the project.

Our Routes project represent a window to discover the Jewish presence in Europe, presenting Jewish heritage as an integral part of European history and culture. It is important to note that the nature of Jewish heritage is complex. Our field of work integrates two thousand years of history and a good part of it is marked by a legacy that includes very dark pages of European history, such as the Second World War. Here, the challenge is to be able to create narratives in positive, without escaping, or without hiding parts of a heritage that touch the deepest sensitivities. Although these facts force us to be very careful, it is also true that it invites us to be in a privileged position to promote and put into practice the values of the Council of Europe: human rights, cultural diversity, and intercultural dialogue.

In this sense, the clearest and most important synergy between the projects would be to understand the places of Jewish heritage as a living laboratory, in which we question what significance that place had in the past, but inviting the citizens to reinterpret and seek new meanings and experiences in the present and in the future. The experience of knowing and understanding “the other”. The question always arises on how to create new experiences around the traces and remnants of these heritage sites. I believe that such open process of interpretation may stimulate European citizens to co-construct a common democratic perception of their history. We believe that this is the best antidote to any kind of discrimination, including antisemitism, that is based on ignorance.

If you could put your personal vision of Parallel Traces in one sentence, what would that be?

Perhaps I would highlight the great opportunity offered by the project to combine audiovisual art and heritage, as well as the promotion of understanding among peoples, so necessary in today’s Europe.

Victor Sorenssen is the director of the AEPJ, the European Association for the Preservation and Promotion of Jewish Culture and Heritage, and member of the Jury.
In addition to participating in different European projects, he coordinates in the AEPJ the European Route of Jewish Heritage of the Council of Europe and the European Days of Jewish Culture. In Barcelona, he is co-director of the Mozaika Jewish Cultural Platform and the Casa Adret Cultural Center, an innovative space for the promotion of Jewish culture and social activism. Victor Sorenssen has a degree in Political Science and has studied Semitic Philology.