See the ordinary as unusually spectacular: the world of Guest Artist Daniel Grünfeld

Why do you do what you do?

There isn’t one single reason for why I ended up working as a photographer. It just turned out to be a perfect combination of multiple factors that I enjoy very much. I did various other things before coming to photography at around the age of 32. Some of the factors that led me to photography were biographical: my grandparents on my father’s side were also photographers for example; other factors had to do with my theoretical interests in the anthropology of science. One major research project I did at university was to look at how we use imaging techniques and machines in astronomy.  I was trying to blur the lines between science, art and mythology, and reveal the connections between these three areas, but I don’t think I really managed to convince anyone that these things are constantly leaking into each other. If you would put me on the spot and make me really name one main reason for doing what I am doing, then I’d probably say something about how I am actually more interested in the process of making photographs, rather than in the resulting images themselves. What I love about this work is that it gives me a kind of free pass to go out into the world and just follow my intuitions and curiosities, connect with people and get a glimpse of “life worlds” that are completely new to me. I guess this concept of Lifeworld  (Lebenswelten) is an important part of my attitude towards photography. I was lucky to study anthropology with Tim Ingold, a thinker I admire immensely, and I suppose that this approach he developed that became known as the “dwelling perspective” is central to what I do. I love seeing things through other people’s eyes; connect to them and their places and then somehow share these experiences. I want to tell people, “Hey look at this thing! it’s beautiful and weird and amazing!”

What does Parallel Traces as a project mean for you?

It was very interesting for me to come to Sighet, pretty much the opposite side of Transylvania of where I am from, and explore Jewish traditions that at first felt quite different to the one I belong to. During my upbringing the Jews that were revered were Freud, Durkheim, Einstein and Kafka, and not the Rebbe of Satmar. I knew hardly anything about the orthodox Jewish schools of Maramures before starting to work on this project. I am happy I had a chance to explore this part of the Jewish people that I myself belong to. It really broadened the picture for me.

How was it like to shoot in Sighet for the project? Were there any relevant moments you would
like to recall? people you met, things you saw, interesting shots…

To be honest, Sighet was one of the best working environments I had experienced so far. From the start, I felt right at home there. Particularly the way in which people approach and talk to each other has a kind of simplicity and directness that I think is remarkable. Every day there was surprising and intense, and so many people I met seemed a little bit weird and interesting in ways that I loved. While in Sighet I started doing a series of portraits and I’m looking forward to publishing them in the future and share a whole bunch of really bizarre situations that these people led me into.  Apart from the people, I thought that the light and the colours in Maramures were phenomenal. Every place in the world has its own light and its own palette of colours and that is a really fascinating thing to observe and work with. I arrived in Sighet in early March, just when the snow was starting to melt and left these deep brown and greenish hues in the landscape. Heavy wintery clouds were often still in the sky, turning the sunlight into this diffused deep illumination that seemed to be coming from everywhere. It really made me wish I was a better landscape photographer.

I actually want to show you this one picture I took: 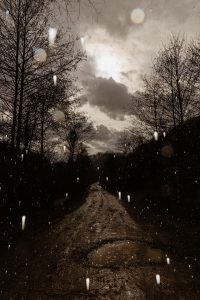 It was during a sudden hail and snow and rain that came upon us while in the middle of nowhere, and I think that it can tell you a lot about what kind of place Maramures is around this time of the year.

I don’t know really, there’s so much happening all the time! What comes to mind is maybe this early period when I learnt photography from Manfred Wegener, a photojournalist who for thirty years worked more or less exclusively for a magazine in Cologne called StadtRevue. I also now work for them regularly. I basically spent about two years cycling after Manfred through the streets of Cologne assisting him and doing the odd assignment here and there under his mentorship. I have this image of him, of how he always had his tripod strapped to the frame of his bike like a lance and his camera just thrown over his shoulder, with his white curly hair flapping around, riding through the city like Don Quijote. I loved that time and I really learned a lot. At some point I wrote under a picture I framed for him for his birthday, that what I thought he actually taught me during that time was the ability to suddenly see the ordinary as unusually spectacular and to accept the extraordinary as naturally common.

Tell us about the person or/and a word/phrase that you carry with you all the time.

Well, I actually do have this little thing I take with me wherever I travel. It’s always in my bag somewhere. Someone gave it to me about ten years ago and I’m sure she would be very surprised to know that I still have it with me. It’s a little piece of thick cloth wrapped around a round coin made of clay. The shape of a fairy is imprinted into it. She is called the Road Fairy. The cloth wrapping the coin has a little prayer written on it. It’s in Hebrew and it goes like this:

My path
is this very step right now
and in every moment I can choose
to stop and to breathe
to look anew
to listen to my heart
and to remind myself
that the time is now.

Daniel Grünfeld
Daniel Grünfeld is an internationally published documentary photographer, currently living and working between Germany, Romania and Israel. Coming from a philosophy and social anthropology background, his main interests in photography are quasi ethnographic, though he ends up doing a lot of portraiture, fashion campaigns and architecture photography. Most of his work is for editorials and documentary projects that are published in books and magazines.
In recent years, apart from his commercial and editorial work, he began working on various assignments concerning Jewish history in Romania. Among the organizations and collaborating partners were: Centropa (Vienna), The David Berg Foundation (New York), The Hebrew University – Center for Jewish Art (Jerusalem), Anne Frank Zentrum (Berlin), Center for Hebrew Studies & Goldstein Goren Center for Israel Studies (Bucharest), JewishGen (New York), Claims Conference (New York).
Due to his background in cultural anthropology and as a descendant of Transylvanian Jews, he is seeking to extend his body of work at the intersection of documentary and artistic photography, as well as historical and ethnographic research.
As is probably the case with many photographers, his style, his topical interests and forms of publication, as he himself admits, are by no means definite. They are rather a constant work in progress, in which Daniel is always seeking to improve, keen on trying out new things and finding new ways of communication.